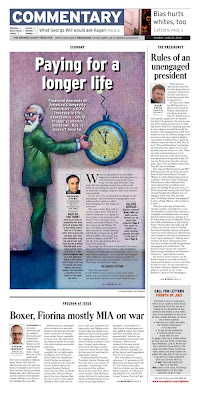 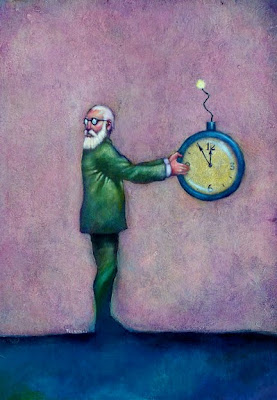 This is for Cathy Taylor, Editor of the Commentary Section, The Orange County Register. The story is about the fact that people are living longer now but retiring at the same age as always, 65, and that "in 2010 revenues for Social Security will fall short of payouts by 29 billion dollars. That wasn't supposed to happen until 2017." Cathy emailed me on Thursday the 10th with this job. She wasn't sure if it was going in Sunday the 20th's paper or the following Sunday. 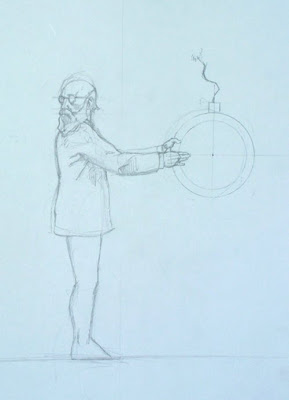 This is the "finished" pencil drawing on a 15x20" sheet of double thick cold press illustration board. I didn't draw any more than this.
I figured why draw numbers and clock hands and fingers? They won't get painted until later so why waste time?
He's balding in this and I decided to add hair as I was painting it.
And yes, I used a compass. A little plastic toy compass I bought at a dollar store many years ago. You can still see the hole in the finished painting. I left it there on purpose so I'd know where the center was for the clock hands. 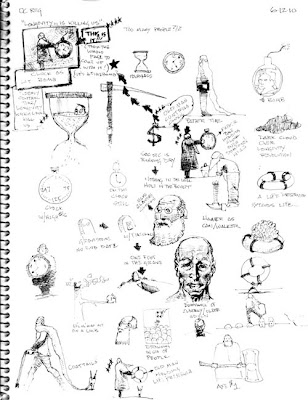 I never show people stuff like this so this is a first.
I doodle every stupid, silly or good idea I have. I get them all out of my head, no matter how dumb, and never edit myself. After I've filled a page I take off my doodling hat and put on my editor hat and critique the ideas.
After looking at the page I saw Father Time holding the clock and thought that's OK. So I gave it some stars. I thought hourglass guy was OK so some stars went there. And I liked the idea of longevity being communicated by a life preserver so the bottom idea got stars. Then I took off my editor hat, put the doodling hat back on and drew some arrows and refined Father Time and gave him a Time Bomb. I left the doodling hat on when I wrote, "This is it!!!" 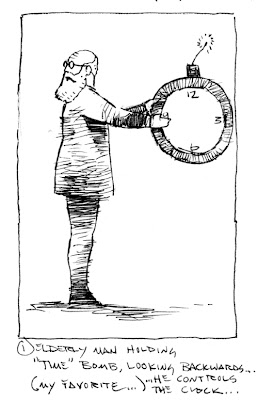 I drew up the three ideas that I finally decided upon in my sketchbook. I made my favorite the first idea and drew it bigger.
I really wanted to paint it but you can never tell which idea an art director or editor will choose. So you better be ready to have a good time painting any of the ideas you send. I scanned and emailed these ideas on Monday afternoon. Tuesday I hadn't heard a word back. I emailed Cathy late Tuesday and heard back on Wednesday. Something had gone wonky with their Outlook and the sketches disappeared. I re-emailed them and on Thursday the sketches disappeared again. I was saying a prayer to St. Jude the painting wasn't due on Friday. She said it would be in the following Sunday's paper.
Finally the sketches went through, Cathy OK'd #1 and I figured, "Cool, I have a week to paint and have fun." Then she emailed a reply asking for the finish by Monday afternoon.
I thought, "Cool, I have a weekend to paint and have fun," dropped everything and started drawing and painting.
I finished at around 1pm on Sunday. 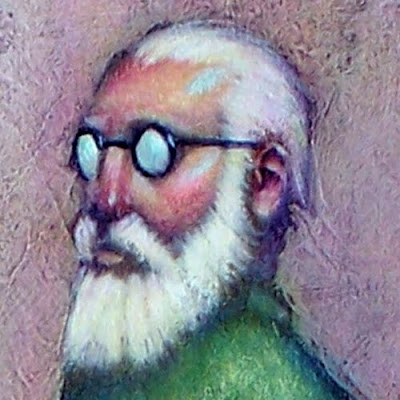 Detail of the head. From the top of his head to the base of his beard is two inches. Mostly, this was painted with a #2 Bright bristle brush. A #2 is long-handled with a flat, rectangular brush about 1/4" inch across. I'd put a tiny bit of paint on it and carefully apply it. Then I'd blot most of the paint off with my thumb. Then I'd add more paint and blot again until I was happy. My thumb looked like a Grateful Dead t-shirt when I was done.The ear is roughly 3/8" tall. A little bigger than the brush. I surprised myself with that ear.
Posted by Tim Teebken at 5:29 PM